The secrets of editing, part 1.

An early success of Maytree Press was the collaborative work, between two rivers by Nick Allen and Myles Linley which, together with Green Fields, you can find in the Maytree shop here

In view if this, we were delighted that Nick agreed to co-edit Green Fields with David – not only did we have a great poet on board but finding a vinyl copy of Fontaines D.C. during an early visit the Allen residence, we also new we had someone who knew their music (and bought vinyl).

From the beginning Nick’s input became invaluable, helping to establish the themes through our early campaign and working through early submissions to help achieve the wonderful thematic collection that we find in existence today. Both editors remained pretty much on the same page, and even when David came with some early 60s inspired psychedelic designs for the cover it was a case of great (or drunk) minds thinking alike.

To say the whole editing process was painless and straightforward would be correct, that is, if it wasn’t for the Morris Dancing (MD) poem. An important aspect of the book that both editors wanted to achieve was the whole festival vibe – not just music but the love, peace, dancing and, in some cases, otherworldly worship that surrounds music. What David didn’t know is that Nick has a not so secret dislike of MD – we’re fairly sure that had Armitage or Duffy come along waving their MD poems at us or if we’d discovered a hidden MD masterpiece in the library of lost poems then it still wouldn’t have made the initial cut such is Nick’s aversion. The secrets of the editors. We’re pleased to say that after several high profile discussions (read, pub/café) David came out on top and the MD poem stayed. It’s Sarah’s second poem in the collection and adds a wonderful interlude before we race towards Heaven – of which you can discover more on Friday. You’ll find it just after Mike Farren’s folk inspired, Underneath the Stars.

A torn dress.
Reborn,
alive with colours and motion.
Irrepressible.

The shivery beauty
of twenty-year old rags,
the engine-fuel shimmer
of newer fabrics
settling, then alight,
unable to maintain stillness.

A lilt.
A lift.
A heightened spirit.
Eyes wider open.

A Wayzgoose Morris Dancer’s smile,
the taste of Kirkstall Pale,
The Abbey Inn, lit by the inclusive warmth of folk music,
and a friendship
forged deeper
in this night. 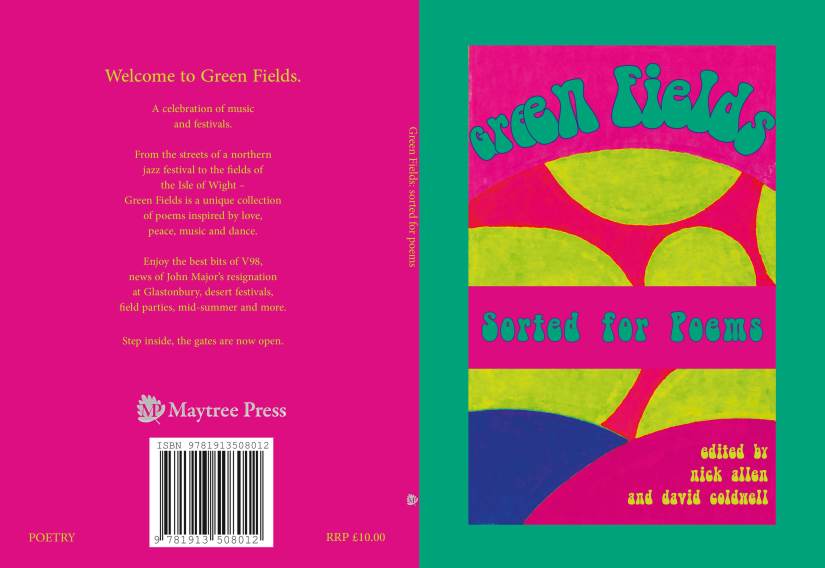