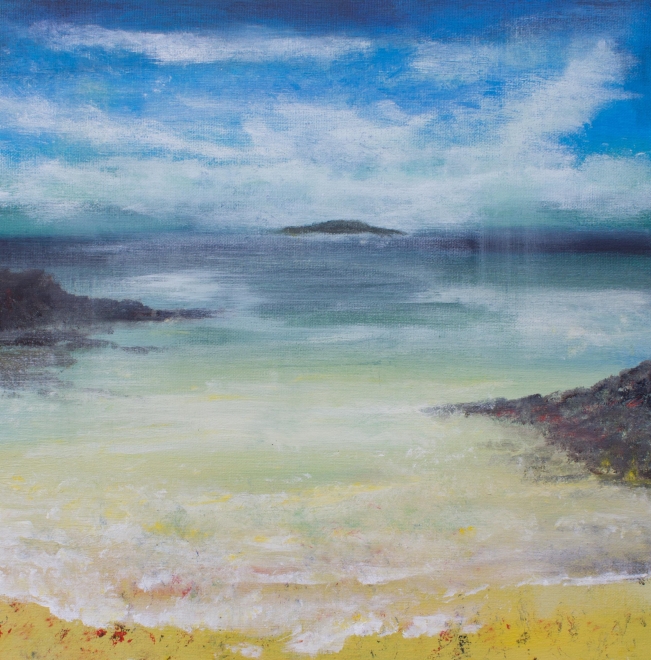 There was no wind ‘til we got on the sands,
By then it was too late to turn back to the car,
Not that we would have done that anyway.
The sky was clear and we used the binoculars
To look out across the water at Inner Farne
And its salt cellar lighthouse. We clambered
Up the dunes, sand slipping beneath our feet
So that we had to crawl up the last few metres
On our hands and knees, clutching at clumps
Of Marram grass for leverage like schoolgirls
In a fight. From the top Bamburgh shimmered
In the distance, blurred by the heat of the afternoon.
We traversed the hair parting paths for a while,
Stopping to look at the flowers and plants,
Checking them in the Seashore book we bought
At Beaumaris, Beeston or somewhere else.
We snapped shots in the pillbox above the beach
And on the way back down we found an old bunker
Silted up with sand and Fosters cans.
We carried on towards the castle, kicking a bouncy
Ball between us, a planet orbiting our galaxy
Until that dog came and snatched it up,
Much to our amusement. When we reached
The castle we climbed once again to the top
Of the dunes and stood for a moment
Looking at its dark, craggy form, built,
We didn’t know then, on Whin Sill,
That stretches back along the route we had driven
That morning to the other side of the Pennines.
For us it went back even further, to those days
At Housesteads when we walked along the wall,
Staring out at the Cheviots and Scotland beyond,
And further back still to that frozen January
At High Force, when we walked through the snow
To the waterfall and the river that flowed to this sea,
As though each day that we had spent had been traced
Through the land, the water and our hands,
Two concordant coastlines banded together by love.

Colin Bancroft is currently living in exile in the North Pennines where he is finishing off his PhD on an ecocritical reading of Robert Frost.